Only a limited number of manufacturers are actively engaged in research and development activities, and introduce new technologies to the soldering process. Others are simply trying to copy and reproduce flagships of the companies such as Japanese company HAKKO.  HAKKO’s technologies have evolved to the industry standard levels that are now followed by the hundreds of other manufacturers of the soldering equipment.

HAKKO Metal Industries was founded in 1952. After a few years, the company started to produce the electrical soldering stations, then in 1958 – to export its products to other countries. At that time, NAKKO’s products were in high demand across different continents. However, the company was aware that in order to maintain its leadership, it required new technologies.

To be able to innovate and introduce novelties, HAKKO Metal Industries heavily invested in research and development. As a result, in 1976, company engineers designed the HAKKO Ceramic Heating Element. This revolutionary innovation had a massive impact on the entire industry. 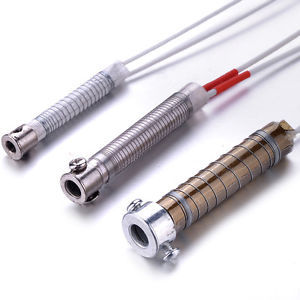 Medium and high power soldering irons usually have a resistive heating element made of nichrome wire. These soldering irons are very affordable, reliable, and well known for their durability. However, they have some significant drawbacks that could not be easily eliminated, for example:

HAKKO heating element has a fundamentally different design: an exclusive sputtering technology is used to apply a thin layer of the metal conductor to the ceramic, which is then rolled into a tube and cured at the high temperature. The result is a super powerful miniature heating element, able to heat up or cool down very quickly. HAKKO ceramic heating element can withstand the heating up to 700 °C (even though you need a much lower temperature for successful soldering). 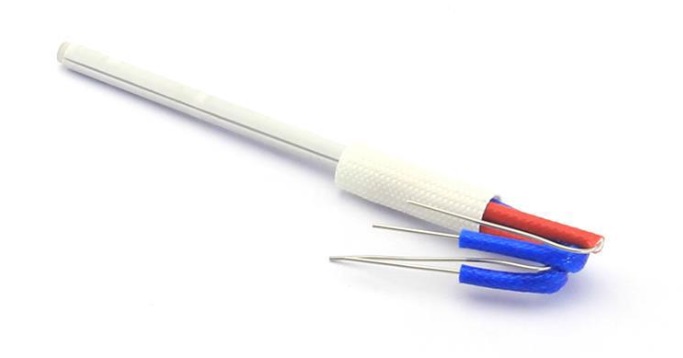 Another significant moment for the industrial sector was the release of the HAKKO soldering station with temperature stabilization. This milestone in 1979 marked the beginning of the new era in manufacturing of the soldering equipment.

Reviewing the company’s history, we must also highlight a legendary HAKKO 936 soldering station. This soldering station with the ceramic heating element and 900M series removable tip became one of the most successful innovations in the company’s history. Many Asian companies still use it as a prototype for their own products. The number of clones is really impressive: you can find its copies with ceramic or nichrome heating elements, with digital temperature indicator, or without one. 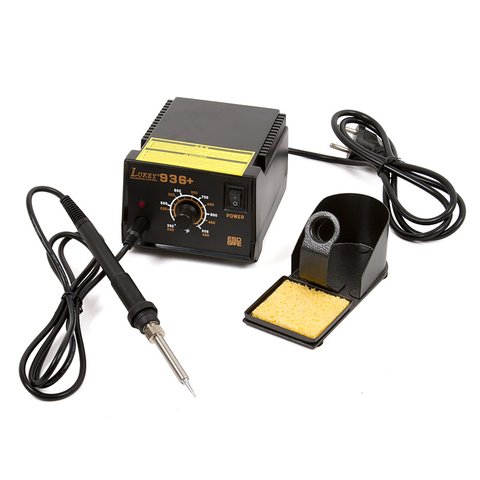 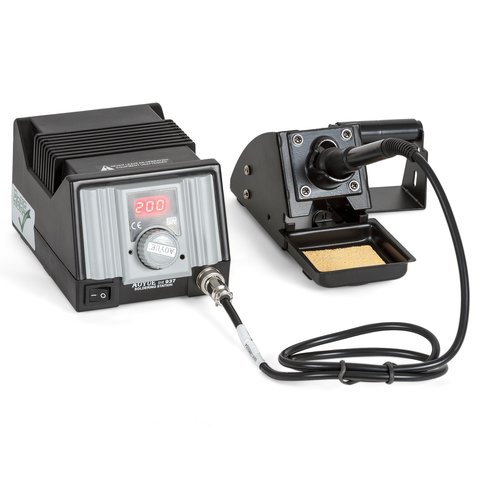 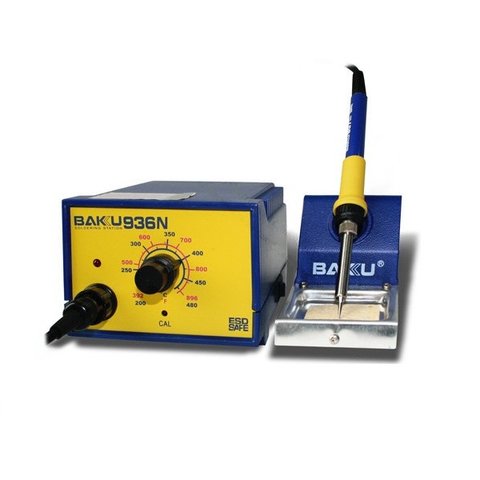 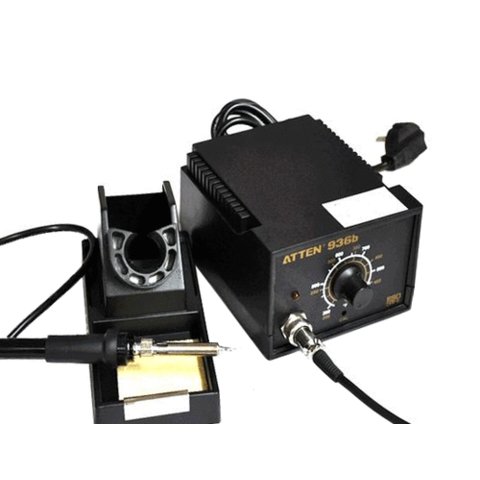 However, the ceramic heating elements with temperature stabilization and HAKKO 900M series soldering tips were not the only successful products HAKKO produced. To meet the new demands of both professional and amateur engineers, the company designed the new models of soldering irons, tips, and stations.

Today HAKKO 900M series soldering tips are still the most popular type of tips, with copies being made in many other countries

The T12 series soldering tips can reach their peak power of over 70 watts. When you replace the tip, you no longer need to waste your time waiting for the old tip to cool down, and for the new tip to heat up. It takes only 10 seconds for them to reach the set temperature. The replacement process itself is very fast and simple. Everything can be done literally in one go.

The company offers an extremely wide range of HAKKO T12 soldering tips of different shapes. You will definitely be able to select the perfect one for the soldering work of any complexity: starting from dismounting of powerful transistors or capacitors to the high-accuracy soldering of modern expensive IC chips with multiple legs.

HAKKO’s official website contains detailed information about the types of soldering tips of this series as well as recommendations for their use. 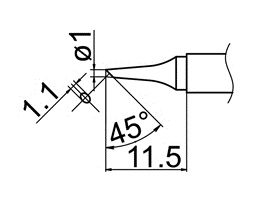 A large selection of soldering tips of different shapes and cross-sectional areas allows the users to select the tip that would perfectly go with the specific type of soldering work.

The BC type soldering tips have a shape of a truncated cone. C marking means cylindrical shape with the cut at a slant. The manufacturer recommends using them for soldering and pre-tinning of lead wires. 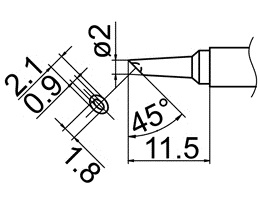 There is also a variation of BC series – BCM/CM series tips. Alike the BC series tips, they have a shape of a truncated cone, but the cross-sectional area of the tip has a slight dint. This series is called a “Microwave”. 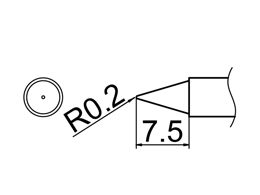 B series soldering iron tips are cone-shaped. They can be of different diameters and lengths. In general, this is the most common series of soldering tips and can be used for almost any soldering job. 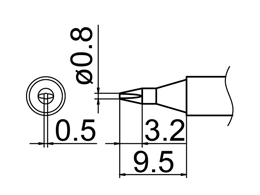 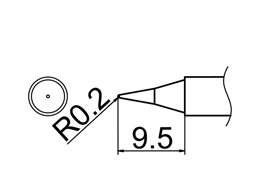 These cone-shaped soldering tips have a very fine tip end and a small working surface. They are recommended for high-density mounting.  I series soldering tips are designed for repairs of modern electronic devices such as smartphones, computer motherboards, laptops, tablets, etc. 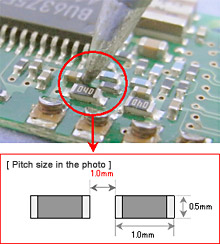 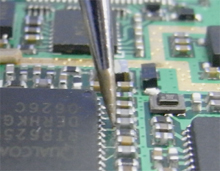 These soldering iron tips are similar to both B and I series, but with a slightly bended tip end. The primary purpose of J series soldering tips is mounting and dismounting of components in confined areas where other soldering tips are simply useless. 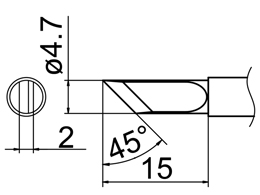 K series soldering tips are knife-shaped. These are the most popular tips as their slanted knife-edge allows for almost any possible type of soldering work.

In addition to the above series of HAKKO T12 soldering tips, there are some other less common series designed for highly specialized types of soldering works. These soldering tips are only made to order, so it is quite difficult to find and purchase them.

Moreover, due to their excellent reputation and high popularity, these tips are often counterfeited. The next article will tell you more about how to distinguish the original HAKKO soldering tips from their counterfeits.

In the meantime, please visit our website to see the full range of the original HAKKO T12 soldering tips.