Oscilloscope is one of the most important and irreplaceable devices for analyzing electrical signals. It’s impossible to imagine a workshop without an oscilloscope, not to mention a big service center. An oscilloscope allows you to observe a signal, measure it, record it or check the change in its amplitude over a period of time. Modern oscilloscopes are excellent devices for testing, fixing and removing malfunctions. They can assess the operability of separate electronic components, as well as assembled modules. 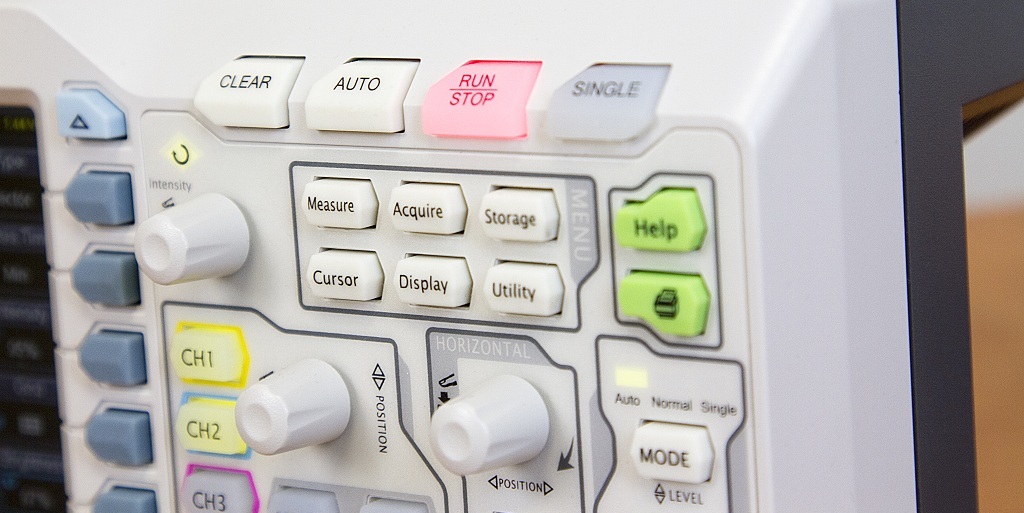 Oscilloscope was invented by a French physicist André Blondel, who built and presented the first electromechanical oscilloscope back in 1893. This device was able to register values of electrical quantities, such as alternating current intensity. An ink pendulum attached to a coil recorded this information on a moving paper tape. First oscilloscopes used several mechanical devices in their work process, which made their measurements not very accurate and their bandwidth rather small, between 10 and 19 kHz. 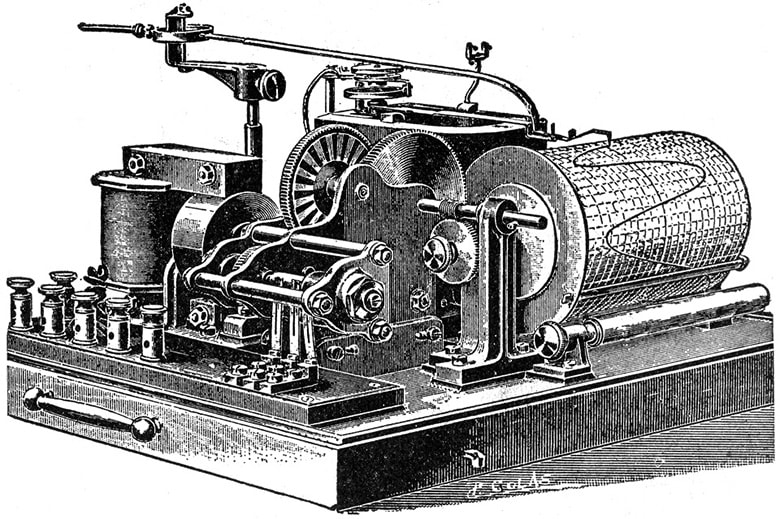 A big step in the development of oscilloscopes was made in 1897, when a German physicist Karl Ferdinand Braun invented a cathode ray tube (CRT). A British company called A. C. Cossor which was the first company in the world that adapted this technology, presented their first oscilloscope in 1932. 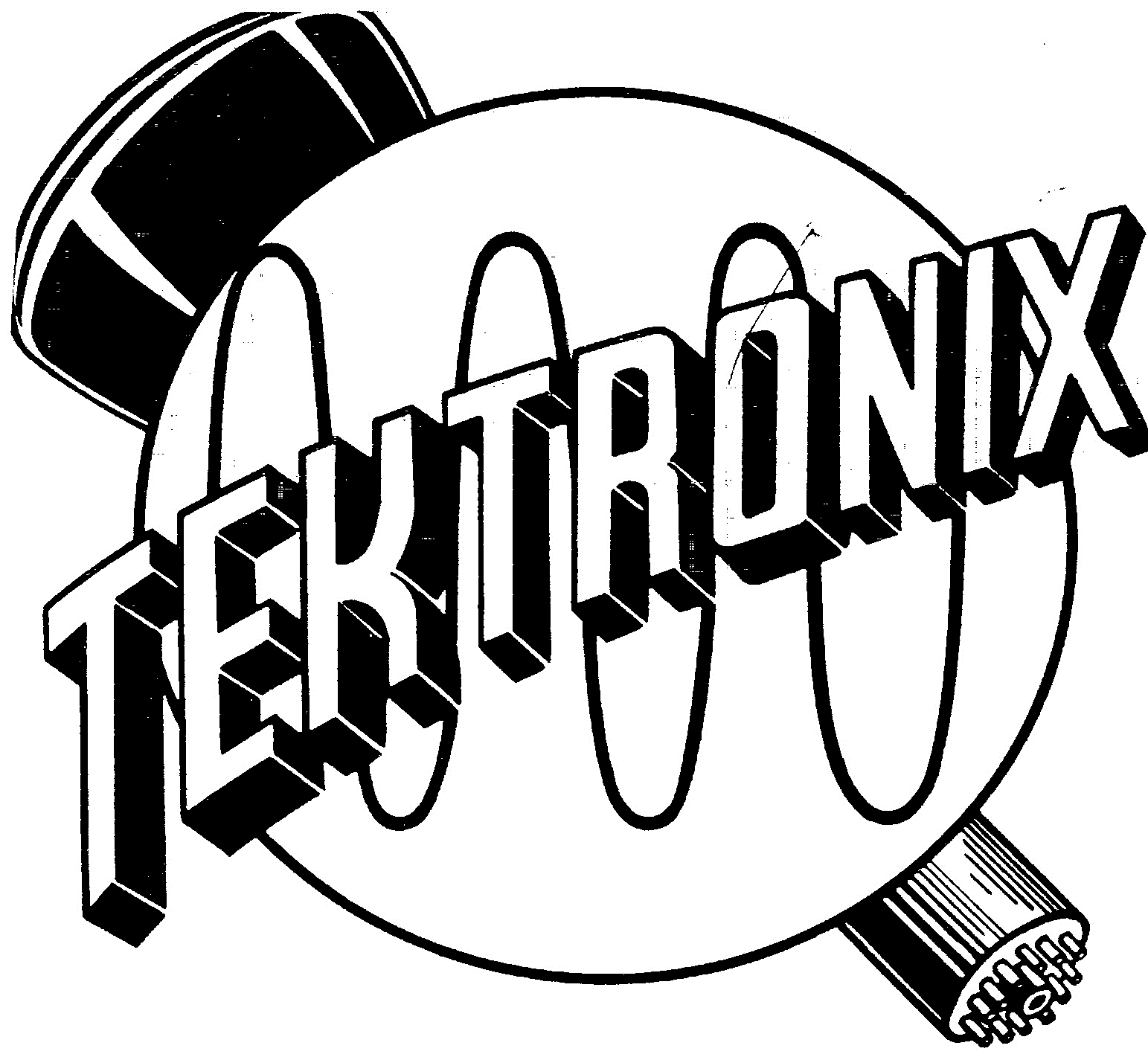 Just like the rest of measuring equipment, oscilloscope development started to increase around the world after the Second World War. This was especially noticeable in Europe and the U.S. In 1946, Howard Vollum and Melvin Jack Murdock founded a company called Tektronix, which soon became the world’s leader in oscillography. In the same year they invented their first oscilloscope with triggered sweep, model 511, with 10 MHz bandwidth. Triggered sweep allowed stationary display of a repeating waveform. 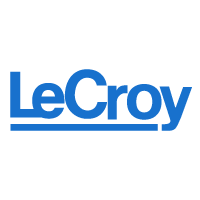 Just like any other measuring equipment, oscilloscopes can be divided into two categories: analog and digital. Both types have their have their positive and negative sides, as well as unique characteristics. Therefore, let’s take a look at each type more closely.

Analog oscilloscopes may still be found in some workshops, as some people still find it difficult to move to an age of digital signal measurement. However, these cases are quite rare. Component prices are constantly decreasing on the digital measuring equipment market, just as it is on the market of personal computers. This makes digital models more and more popular than their analog counterparts. 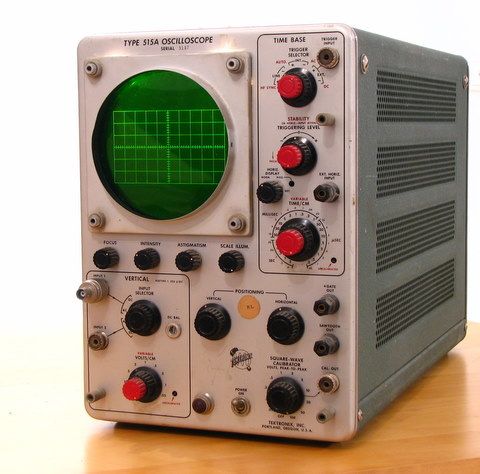 Time base mainly consists of triggers, an integrating amplifier and summation circuits for inverting.

Trigger system consists of a level adjustment switch (to switch between decreasing and increasing the level), a trigger and a coupling selector. Schmitt trigger, which outputs a square signal, is synchronized with other trigger events. Control of the trigger level is performed by changing its transient voltage.

CRT module is a special vacuum tube that contains an electron gun, a set of horizontal and vertical deflection plates, several electronic lenses and a display, covered with layers of fluorescent and phosphorescent coating on the inner side. 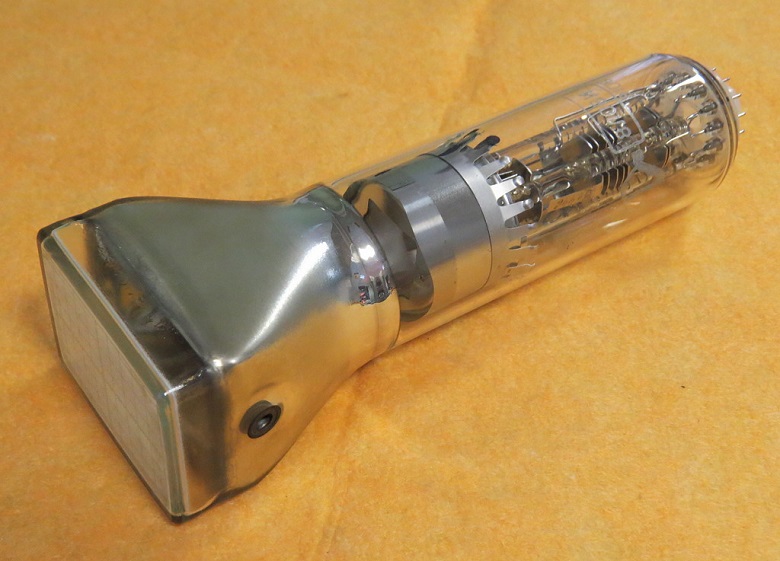 In most cases the bandwidth of analog oscilloscopes is several hundreds of MHz. CRT module is the main part of the device that puts limits on its bandwidth. Such devices can be used to display signal changes in real time, as signal output is completed without digital processing. Bufferization, input signal processing and other concepts, related to modern digital models, cannot be associated with analog oscilloscopes. Input signals are always displayed with a small delay. This is directly related to the working specifics of some circuits of the device.

Digital storage oscilloscopes appeared thanks to technological advancement of hybrid analog-to-digital converters (ADC), which are responsible for swift and accurate digitizing of high frequency signals. Developments in other fields have also played an important role in the evolution of the DSO: compact display modules with low energy consumption and recording devices that have to record data as quickly as the equipment performs sampling. Basically, DSOs use analog-to-digital converters to display signal data in digital format. 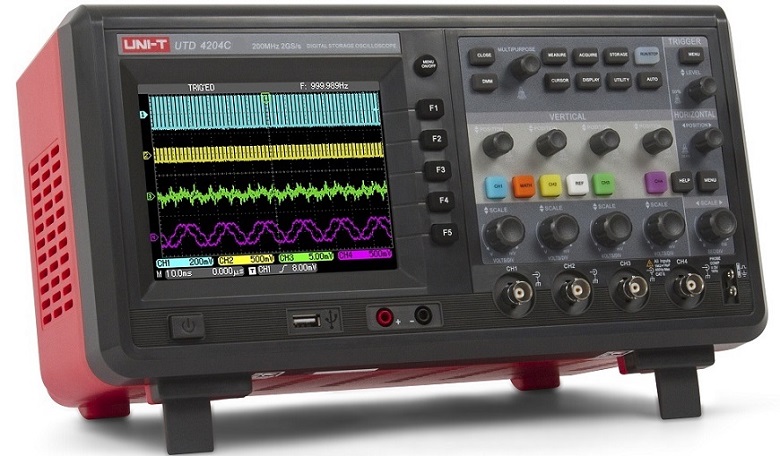 Digital phosphor oscilloscopes are the most developed and highly technological type of oscilloscopes available today. DPOs can be compared to analog oscilloscopes, as they display a signal in three dimensions: time, amplitude and the distribution of amplitude over time (intensity). These oscilloscopes perform high density sampling and have an ability to capture data based on the intensity of the signal. DPOs’ displays make it easy to distinguish the main waveform from its transitional characteristics, as the image of the main signal is a lot brighter. 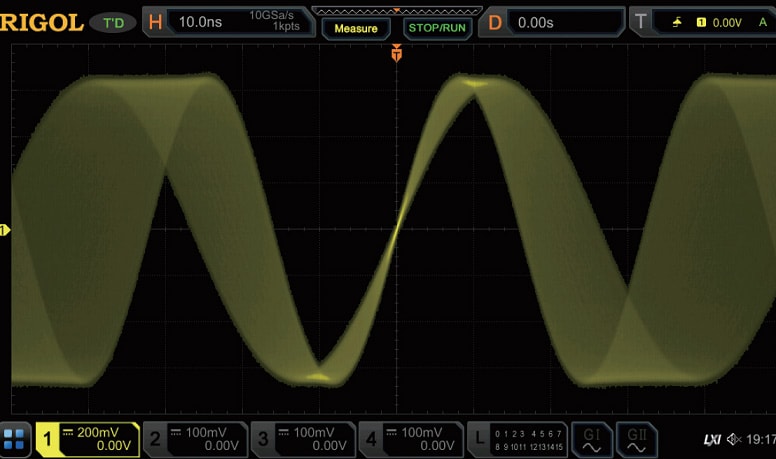 Traditionally, the manufacturing of modern digital oscilloscopes is aimed at developing devices with wider bandwidth and increased performance. Currently the bandwidth of oscilloscopes from the leading manufacturers is 6-7 GHz and even more (in some scopes for advanced signal analysis).

At the same time, there is a trend to develop portable devices. These devices do not possess the  features of desktop scopes, but they are handheld, easy to carry and have attractive prices. Their shape is similar to modern cell phones. 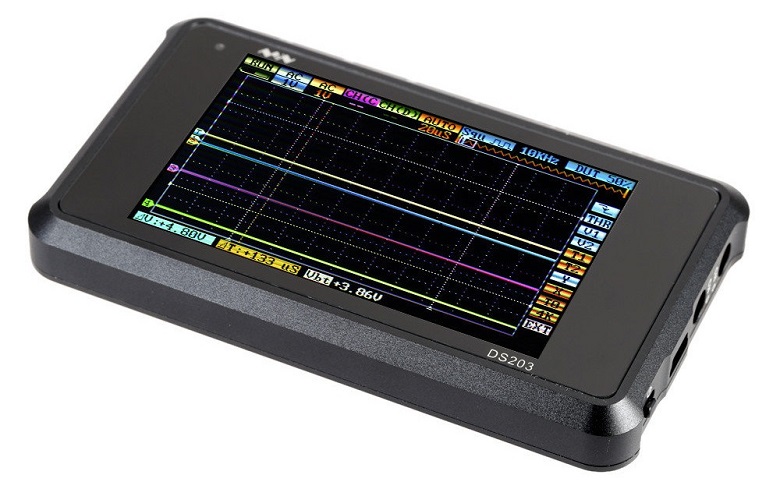 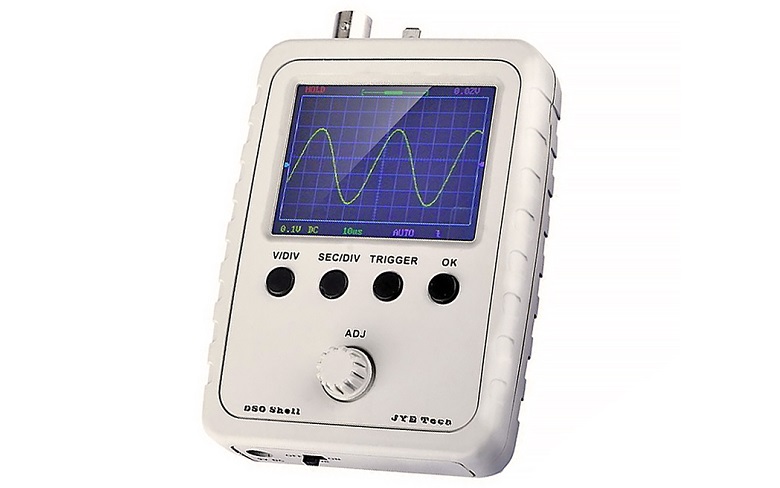 One more type of oscilloscopes are digital  USB oscilloscopes that work together with a personal computer and make it a measuring device. They are controlled via PC and a signal is displayed on its screen. It is usually a small and lightweight device. It may be used to process the signal (it is in fact conducted by your PC). One more advantage is that you may easily save, print or share the waveform. 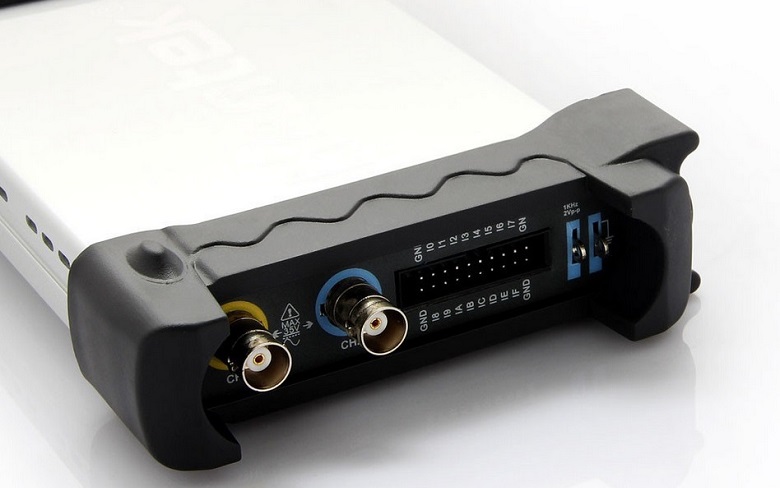 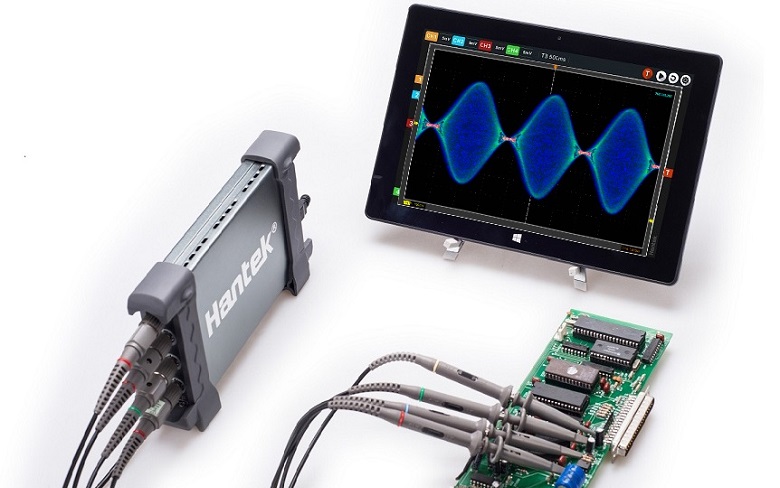 Oscilloscope is an incredibly useful tool for repairing, fixing and testing various appliances. Our store has a wide range of digital oscilloscopes, from more affordable to highly technological models. Contact our technical support if you need assistance with choosing such a device.