Since world manufacturers of electronics launched the program of conversion to lead-free assembly techniques which raise the soldering temperature, soldering equipment for electronic boards repair shall be designed to be more powerful.

Assembling of different electronic elements packages (BGA, SMD, PLCC, DIP, QFP, etc.) when conducting domestic repair requires special equipment and experience. Mainly infrared heaters and heat guns are used for such works. For more challenging operations where there is a risk of textolite distortion plate preheaters should be used.
There is a wide range of hot air guns of low and high class at the soldering equipment market.  These are cheaper soldering hot airs guns of such manufacturers as Lukey, Sunkko, Pros’Kit as well as more expensive brands such as Goot. According to its performance characteristics ATTEN AT860D hot air rework station refers to the high class equipment though at the same time having rather moderate price. 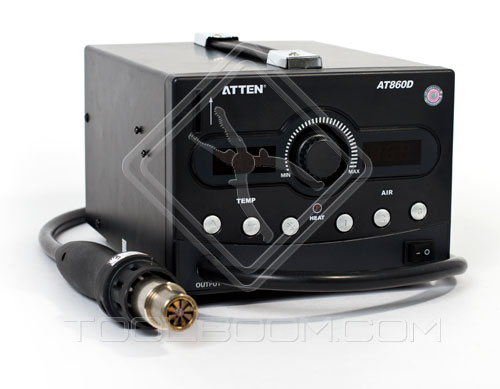 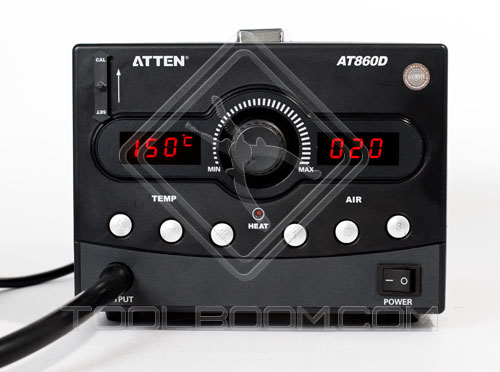 In order to move to the temperature calibration mode of the hot air rework station or in order to set temperature profile you should use a card which should be inserted into the special hole in two possible positions: 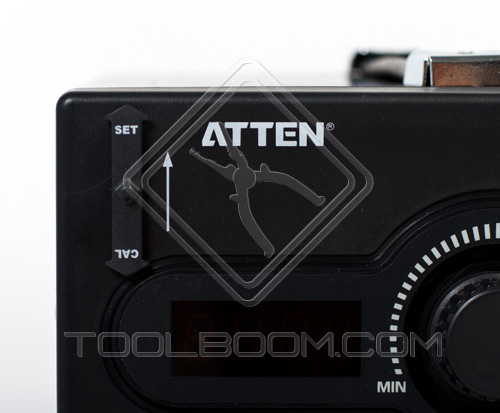 The card should be extracted in order to avoid parameters setting failure. 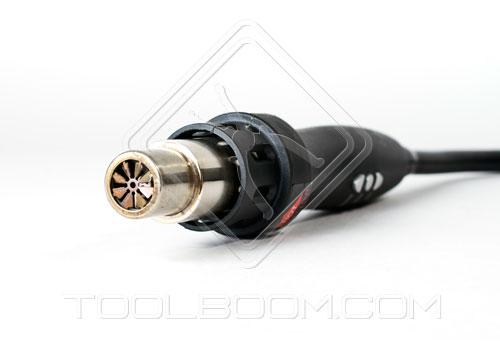 With the aid of the compressor located in the case of the soldering station air flow is created and fed into the hot air gun through the connection hose. There, the air worms up by passing through the heating element and melts solder by blowing over it. Therefore, it is very convenient to solder in and out electronic elements with large amount of contacts and of various sizes. 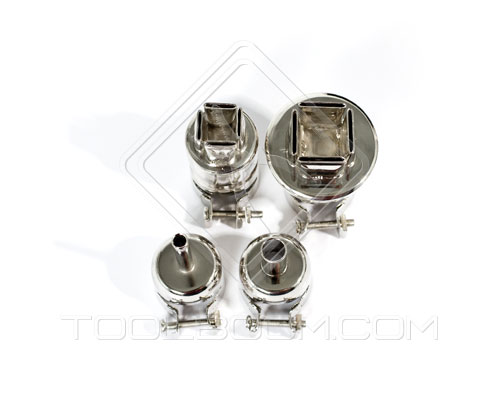 There are rough and precise adjustments for the temperature and air flow levels settings. 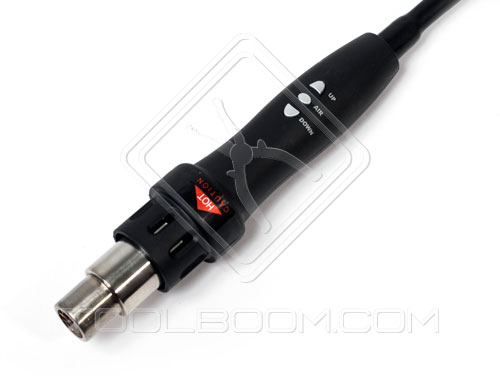 In order to heat the soldering hot air gun to the temperature different from the programmed one it is necessary to press the button of switching of temperature/air flow adjusting mode or AIR button on the handle of the hot air soldering gun after rough adjustment by the regulator or precise adjustment with the aid of the buttons. Only when it s done the system will perform the task.

After turning off the power of hot air rework station heating element of the soldering hot air gun is forcibly cooled to 100ºC in order to avoid thermal overload of the heating element. When solder hot air gun is turned on previous settings of air flow volume would be preserved and the temperature would be set according to its level (200, 300 and 400ºC).

You can program temperature modes of the ATTEN AT860D hot air rework station.  Initially the following three modes are set:

In order to customize settings for 1, 2 and 3 buttons it is necessary to set the temperature of the soldering hot air gun (from 150 to 500ºC) and air flow volume (from 20 to 99), and after that to press the corresponding button and hold it until the sound signal appears. At that time the card should be in the SET mode (with the “SET” upward). Your profile is saved and can be activated by pressing one button. 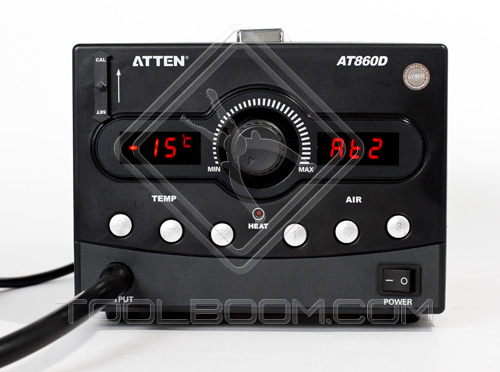 In order to display calibration menu (card in the CALL position upwards) you should press the button of switching temperature/air flow modes at the control panel and hold it until AT2 indication appears at the right display. After doing so you should set the necessary value of the temperature correction and it would be stored in the memory by pressing and holding the same button. 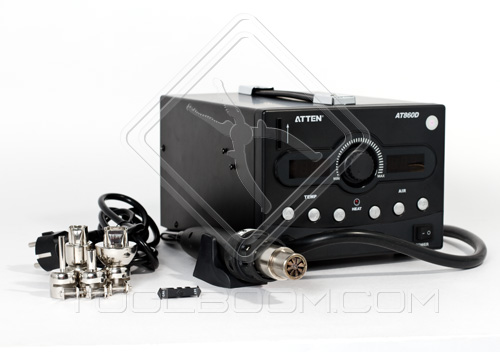 Working with ATTEN AT860D hot air rework station leaves only positive impressions. Why? Judge for yourself. Powerful heating element would heat operating air to the set temperature in a couple of seconds even if it equals to 500 degrees centigrade. It is ideal for lead-free soldering. Soldering parameters regulation is very simple. Rough and precise temperature and air flow volume settings allow you to set these parameters as accurately as possible. Moreover, there is also a possibility to program three temperature modes.

Particular attention should be paid to the function of temperature calibration. Thermal sensors would behave differently under different conditions. ATTEN AT860D hot air rework station allows you to adjust this moment.

And finally. Such heat gun as ATTEN AT860D would never leave any engineer untouched. From the very first hours of work you will realize that price is justified by the parameters and reliability of the hot air rework station.